The effects of solar elastosis

One of the most recognizable and striking signs of skin aging is actinic elastosis. You know what it looks like: thickened, leather-like, deeply fissured skin seen on the back of the sun-exposed neck, but in some people it is also on their faces. These are the most striking wrinkles because they are deep and large. The little wrinkles we complain about are nothing when compared with these huge valleys and mountains in the skin of people who have exposed their faces and necks to UV damage for decades.

Do you know what is going on in actinic elastosis?  Probably not, but you don’t have to. It does matter when people who design skin care products don’t know either. One example of this is the use of sh-polypeptide 50 in skin care. The first problem with this ingredient is that it can be almost anything. In an annoyingly vague International Nomenclature of Cosmetic Ingredients (INCI) definition, it seems that it can be almost any length and any sequence.

In some company’s advertising they talk about this peptide being proelastin, a soluble protein precursor to the very insoluble elastin, which is a giant molecule of incredible complexity (proelastin has a MW of more than 60,000, with more than 600 amino acids). Whatever they are using in their products, there is no mention in the scientific literature that adding proelastin can increase synthesis of elastin in the skin. And this is not surprising if we look at how elastin is actually made in the skin. Please bear with me as I describe this complex process as briefly as I can. If you think that collagen synthesis is complicated, then elastin synthesis is crazy complicated. 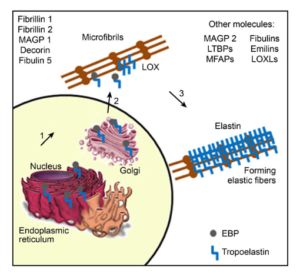 As for all proteins, the first step in the synthesis of elastin occurs inside the nucleus of the fibroblast where the gene is transcribed into messenger RNA. Polypeptide formation from this messenger RNA to form tropoelastin occurs in the endoplasmic reticulum, but several other proteins are also involved. Inside the cell, the elastin-binding proteins associate with tropoelastin monomers to become a complex that will be released from the cell surface (number 2 in figure above). During the formation of elastic fibers, microfibrils’ components function as a scaffold where elastin will deposit. Several other molecules are involved in the process, such as the enzyme lysil oxidase, fibrillin, microfibrils-associated proteins, decorin, fibulins, and more. The mature elastin (number 3 in figure above) is then formed by cross-linking of lysine and tropoelastin, mediated by enzyme lysyl oxidase.

How NOT to repair elastin

Elastosis is also a complex process, where elastin fibers become a mess and the structure of the elastin fibers is completely different from what it should be. From the biochemical point of view, actinic elastosis consists of accumulation of degenerated elastic fibers.

The take home message? That actinic elastosis does not happen because of the scarcity of elastin but because the elastin present is “faulty.” There are two main causes for this problem: 1) normal elastin is modified in a number of ways and 2) newly formed elastin is made “wrong.” Both happen in elastotic skin.

Moreover, because of the complexity of the whole process, we can assume that by adding tropoelastin, or whatever sh-polypeptide 50 may be, elastosis can be aggravated. There is no proof that it helps and no proof that it hurts because no research has been published in scientific journals. The experiment is being done on the consumers, in a gigantic project where the guinea pigs are paying millions of dollars to be used as research subjects in a completely uncontrolled experiment.

The experiment started decades ago when partly hydrolyzed elastin from the neck tendons of young calves was used on women’s skin; an experiment that was granted a patent without any published research to prove benefits to the subjects. The use of elastin pieces received a very small grant from the government because it was suggested that these pieces could be made into a scaffold that may be used in vitro for experiments. The structure of this hypothetical scaffold has no relation whatsoever with the highly organized elastin we have in our skin. I don’t think this was dangerous, because small peptides, if they penetrate the epidermis, will be degraded and used as amino acids by the skin. Yucky? Yes. Dangerous? No.

Don’t let the industry use you to test on your skin an undefined ingredient of any molecular weight and amino acid sequence.