These days you can’t believe everything you read. Or maybe you never could. With the internet as a medium we are bombarded with messages telling us that whatever we are doing is wrong (and to buy that other product).

Stop. The person (or bot, for robot) who is telling you that is only after your “click”. There is no real information behind the panicky message. Whatever the reason for the message, the result is a flood of misinformation. The target today is sunscreen, yesterday it was antiperspirant or petrolatum or preservatives or, worst of the worse, vaccines.

Don’t trust them. But you can trust me.  I read the scientific literature and do my best to discard bad, fake science, and keep the good stuff so that I can inform you honestly, to the best of my abilities (which, as I have discovered recently, they are many).

Going back to sunscreens; if you are planning to go snorkeling among the corals, maybe you could use a sunscreen that contains only zinc oxide. But this would be just a precaution, because there is no good reason to believe that sunscreen has anything to do with the environmental crisis that involves corals.

What we see in the photographs are the exoskeletons built by minuscule animals. The amazing colors are pigments formed by even smaller algae living inside the microscopic animal. When these living organisms are subject to stress (high temperature, chemical pollution, infection) the algae are expelled and the coral is bleached, a phantom of the beautiful creature it once was. If the stress is reversed fast enough, the algae may be recovered together with the magic. If not… 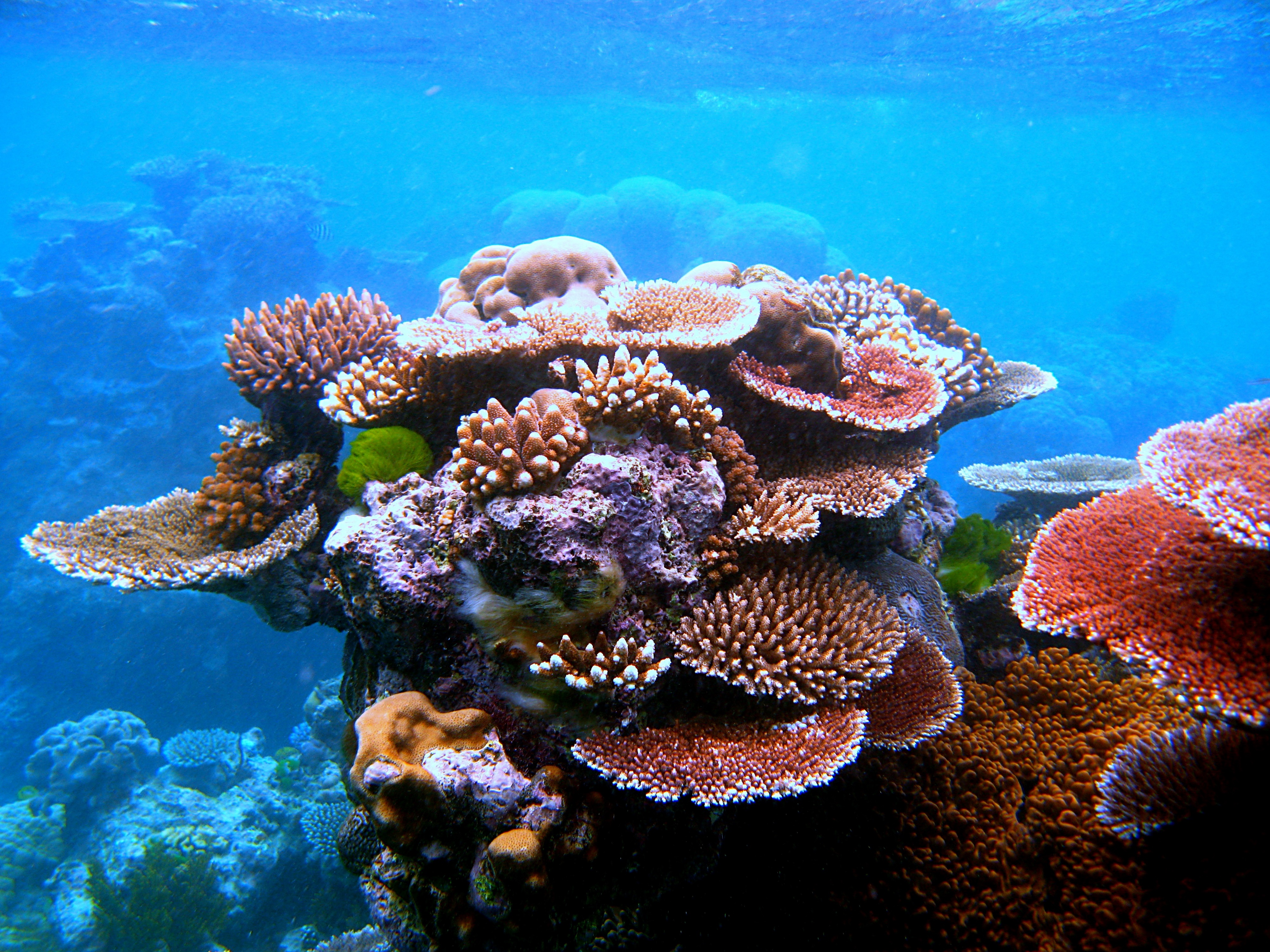 Figure: A variety of corals form an outcrop on Flynn Reef, part of the Great Barrier Reef near Cairns, Queensland, Australia. By Toby Hudson.

The longer explanation, from Wikipedia (which is great for biology and biochemistry). Corals are marine invertebrates within the class Anthozoa of the phylum Cnidaria. They typically live in compact colonies of many identical individual polyps. Corals species include the important reef builders that inhabit tropical oceans and secrete calcium carbonate to form a hard skeleton.

A coral “group” is a colony of myriad genetically identical polyps. Each polyp is a sac-like animal typically only a few millimeters in diameter and a few centimeters in length. A set of tentacles surround a central mouth opening. Each polyp excretes an exoskeleton near the base. Over many generations, the colony thus creates a skeleton characteristic of the species which can measure up to several meters in size. Individual colonies grow by asexual reproduction of polyps. Corals also breed sexually by spawning: polyps of the same species release gametes simultaneously overnight, often around a full moon. Fertilized eggs form planulae, a mobile early form of the coral polyp which when mature settles to form a new colony.

Although some corals are able to catch plankton and small fish using stinging cells on their tentacles, most corals obtain the majority of their energy and nutrients from photosynthetic unicellular dinoflagellates of the genus Symbiodinium that live within their tissues. These are commonly known as zooxanthellae and gives the coral color. Such corals require sunlight and grow in clear, shallow water, typically at depths less than 60 metres (200 ft). Corals are major contributors to the physical structure of the coral reefs that develop in tropical and subtropical waters, such as the Great Barrier Reef off the coast of Australia. These corals are increasingly at risk of bleaching events where polyps expel the zooxanthellae in response to stress such as high water temperature or toxins.

It depends on the area. Florida’s coral reefs have recently experienced a multi-year stony-coral-tissue-loss disease related mortality event that has resulted in massive die-offs of several reef-building coral species;  this disease affects at least 24 species of scleractinian coral. It seems that the disease is contagious; the agent has not been identified yet but Rhodobacterales and Rhizobiales bacteria may be involved.

Even if bacteria are the proximal agents, environmental changes may also be involved. For example, changes in sea temperature may affect the physiology of the corals and make them more prone to bacterial infection. Other factors are chemical pollution and sedimentation.

To understand why corals die, we have to understand their complexity. They are not a single organism, they are a holobiont, made of a symbiosis (a cooperation that is of mutual advantage) of an animal, a Cnidaria and zooxanthellae, minute flagellated algae. When things get tough, the algae and its pigments are lost from the coral tissue, producing a skeletal white appearance. If the coral is repopulated by zooxanthellae soon enough after bleaching, it can reform a viable holobiont, but otherwise the coral will usually die.

As usual, what bothers me is the ignorance pushed onto the public by people/organizations who have a secret agenda. The worst are those who would  like (at least in theory, they hope to be saved) to see humanity erased so that corals can flourish again. I would not swap my grand kids or opera or science fiction for anything. Others may be trying to sell you their products, but their methods are not that different from those willing to sacrifice humanity in order to keep corals and mosquitoes alive.

Gaia, or Pachamama, or Nature, whatever you call it, includes humans.  I may not love humanity but I love my humans.

In short: yes, we must care for corals, we must work on saving the environment from ecological disasters that stem mostly from the overuse of fossil fuels and increased carbon dioxide in the atmosphere and the subsequent increase in temperature of the sea and the world.    But don’t trust the ignorants that tell you that you must sacrifice your skin to melanoma in order to save Gaia!