One should think that, as more people use sunscreen, skin cancer incidence would decrease. Actually, the incidence of non-melanoma skin cancer is increasing worldwide despite the increased use of sunscreens. In 2014, the USA Surgeon General estimated that 2.2-5.0 million people were treated annually for basal cell carcinoma and squamous cell carcinoma.

Why is there more skin cancer despite the use of sunscreen?

I am not epidemiologist (and I have not seen explanations in the literature) but I can think of some reasons.

Whatever the reasons, it seems to me that there is a need for increasing of both preventive and corrective measures, beyond the use of  sunscreens.

UV light is most commonly implicated in skin cancer development. Let’s look at what the solar spectrum looks like.

Ultraviolet light is classified into three categories: UVA (long wave, black light, 315 to 400 nm), which causes tanning, UVB (medium wave, 280 to 315 nm), which causes sunburn, and UVC (short wave, germicidal, 100 to 280 nm), which is filtered out by the atmosphere and does not reach us. 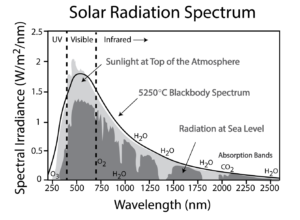 Prevention and protection (beyond sunscreen)

Sunscreen is not a perfect tool.  Maybe it is time to redefine a “cool person” as one that known his/her body and accept the limits imposed to us by nature. Avoid the sun, wear a hat, don’t go out in search of a tan or a sunburn. Sunburns are definitely uncool.

Prevention is still the easiest option because there are so many tools to prevent damage to DNA but not much that can be done after it is damaged. What else is out there for prevention besides sunscreen?

Reactive oxygen species (ROS*) are very much involved in the mechanism of sun damage to the skin, so disarming ROS* should be an important part of preventing DNA damage.  DNA damage mediated by oxidative stress has been found by numerous studies to play an important role in the various stages of initiation, promotion and progression of cancer. Lipid peroxidation of cellular membranes and accumulation of mutagenic products in DNA can contribute to mechanisms of carcinogenesis. Telomere shortening through oxidative stress and senescence also increases cancer risk.

Sunburn is followed by inflammation.  During inflammation, enhanced ROS* production induce DNA damage, inhibition of apoptosis (programmed cell death), and activation of protooncogenes. Inflammatory cells are particularly effective in generating ROS* and other reactive species, increasing oxidative damage and promoting the various mechanisms of carcinogenesis.
Please read my older posts, I have discussed the tools offered by Skin Actives to disarm ROS* before. Also, have a look at Skin Actives soothing products, a serum and a cream .

How does the cell cope with damaged DNA? Damage to DNA, caused by normal cell metabolism, or by UV, or by free radicals, happens all the time, with molecular lesions counting in the millions per day. DNA damage may prevent the production of an active protein, or affect the survival of the cells produced as the damaged cell divides. When too much damage has occurred, the cell will senesce, die or, worse, go into unregulated cell division, which can lead to cancer.

DNA repair  is vital to life and is complex.  The Nobel prize of Chemistry of 2015 was awarded to three scientists for their work on DNA repair.  The DNA repair process is constantly active as it responds to damage in the DNA structure.

“Tomas Lindahl demonstrated that DNA decays at a rate that ought to have made the development of life on Earth impossible. This insight led him to discover a molecular machinery, base excision repair, which constantly counteracts the collapse of our DNA.

Paul Modrich has demonstrated how the cell corrects errors that occur when DNA is replicated during cell division. This mechanism, mismatch repair, reduces the error frequency during DNA replication by about a thousandfold. Congenital defects in mismatch repair are known, for example, to cause a hereditary variant of colon cancer.”

Can we help our cells repair damaged DNA?

What we need is to promote DNA repair,  decrease inflammation and target precancerous cells. Have a look at Skin Actives UV repair cream.

When it comes to repairing DNA, this is a complicated mechanism and only a few options to help the tools already available to us. Slowly, some chemicals are being identified as beneficial for this purpose, and scientists are starting to understand their mechanisms of action.  For example, when telomeres become very short they are no longer able to protect chromosome ends; and actives that promote telomerase activity will elongate telomeres, preventing DNA damage.

Which actives can help?

Niacinamide, chemical name nicotinamide, a.k.a. vitamin B3, seems to protect against UV caused oxidative stress (and immunosupression)  by increasing availability of NAD+, letting the glycolytic pathway and ATP production to continue.

Melatonin, the main product of the pineal gland has antitumoral and anti-inflammatory properties.  We use it in our post-radiation cream.
Retinoids   Beneficial effects of topical retinoids were observed in the treatment of actinic keratosis, basal cell carcinomas, and in malignant melanomas. Look at Skin Actives Vitamin A cream for a good retinoid that will not irritate your skin.
Take home lesson: take care of your skin and the DNA in your skin. Once damaged, it is hard to fix.

DISCLAIMER: These claims have not been evaluated by the FDA and are not intended to diagnose, cure, treat or prevent any disease.