I would choose two: Drs Luis Leloir and Carlos Cardini. They were also among the very best scientists I ever met,  and leaders of a scientific group that achieved Nobel prize fame. They were also great at promoting women and respectful and kind.

From one of my articles: “Although the basic studies in starch biosynthesis were carried out in England during the 1940s and led to the discovery of phosphorylase and Q enzyme (branching enzyme), the basis of our modern ideas originated in Argentina from the work of Luis F. Leloir and Carlos E. Cardini. During the late 1950s, they established that nucleoside diphosphate glucose was involved in the synthesis of both glycogen and starch. In this paper, we describe the events leading to these discoveries and the implications of that early research for starch biochemistry as well as for plant biochemistry in general and our understanding of human and bacterial metabolism.” 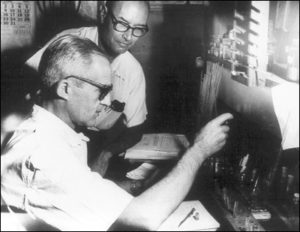