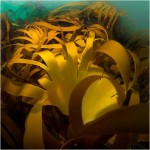 Sea Kelp Coral supplies a complete nutrient medium and moisturizes skin and scalp. The substrate for fermentation is kelp, a sea macroalga (Phaeophyta). Fermentation makes the cell contents of this alga readily available to our skin and scalp. This maximizes its moisturizing properties, as well as making nutrients available that are required by the skin. The ferment also has calming, anti-itch activity.

The bioferment is rich in fucoidan (see below), caragenaan, algin, minerals, and many active chemicals. It also provides minerals like iodine, copper, molybdate, magnesium, and others required as cofactors in enzymatic reactions of lipid metabolism and energy conversion. Fucoxanthin is a pigment present in Phaeophyta (brown algae) that may protect skin from photo-aging caused by UV (Urikura et al., 2011). Fucoidans are sulfated polysaccharides with structures that depend on the plant source and growing conditions. Applied to the skin, fucoidan will increase the density of collagen bundles, decrease activity of proteases (enzymes that break down dermal proteins), increase scavenging of free radicals, and increase cell proliferation. These effects would be mediated through increased expression of ß1-integrin and may also help with wound healing. In addition to assisting in collagen synthesis, fucoidan inhibits the replication of many viruses, including herpes, human cytomegalovirus, HIV-1, and others.

Astaxanthin gives our sea kelp coral its color. Astaxanthin is similar to some pigments that give coral exoskeletons their color. This is not just a similarity in color but also in chemistry. Most corals obtain the majority of their energy and nutrients from photosynthetic unicellular algae, called zooxanthellae, that live within the coral’s tissue, and these algae also produce pigments that protect the coral from the sun.  Because of its particular molecular structure, astaxanthin serves as an extremely powerful antioxidant. It has a very effective quenching effect against singlet oxygen, a powerful scavenging ability for lipid and free radicals, and effectively breaks peroxide chain reactions. Carotenoids are effective at low oxygen concentrations, complementing the activity of vitamin E which is effective at higher oxygen concentrations. Astaxanthin has also been shown to enhance and modulate the immune system. The antioxidant and immunomodulating activities, in combination or separately, may reduce the acute inflammation reaction in the skin, and tissue just beneath the skin, that follows excessive exposure to UV radiation.

Superoxide Dismutase (SOD) with Catalase – In our cells, we have our own SODs, but we can protect our skin by supplementing them with topically applied SOD. The size of the SOD used in skin care varies between 10,000 and 30,000 molecular weight, which is relatively small for an enzyme but large enough to be excluded from live cells. The fact that SOD is unlikely to enter live cells is not a problem. Lipid peroxidation occurs everywhere in the skin, not just in the live cells. The role of SOD is to eliminate the free radicals resulting from lipid peroxidation and to prevent the chain reactions that would eventually reach deeply into the skin, and topical application of SOD will certainly help to achieve this aim.

Thioredoxin – Thioredoxins are proteins that act as antioxidants by facilitating the reduction of other proteins by cysteine thiol-disulfide exchange. Thioredoxins are found in nearly all known organisms and are essential for life in mammals.This is an enzyme I became familiar with in my days as a plant biochemist, long before Wikipedia (or the internet, for that matter) was invented. Thioredoxin is “everywhere,” including the regulation of the most abundant protein on earth, Rubisco (the enzyme that “fixes” carbon dioxide making life possible for every plant and animal, including us). Thioredoxin will make sure that the chain of events keeping proteins in their “right” reduction state is kept well oiled. Or, in other words, thioredoxin will facilitate the reduction of your skin proteins by cysteine (in a disulfide bond|thiol-disulfide exchange). The Trx (thioredoxin) and Grx (glutaredoxin) systems control cellular redox potential, keeping a reducing thiol-rich intracellular state, which no generation of reactive oxygen species signals through thiol redox control mechanisms.