Oxidation and aging
When it comes to skin aging, there are two main culprits: UV light and oxidants. Much of the damage caused by UV light happens through reactive oxygen species (ROS*), so ROS* are key to skin aging and health.

Whatever oxygen bars may tell you, you and your skin have as much oxygen as you need. The concentration of oxygen in ambient air is 21%; for anybody with healthy lungs and skin, this is more than enough. Prolonged exposure to oxygen partial pressures higher than normal will cause oxidative damage to lipids and cell membranes, eye damage, and more. Our bodies have not evolved to contend with oxygen concentrations higher than what is already present in the atmosphere. Moreover, even current oxygen concentrations may cause oxidative damage. When we use oxygen in respiration, the process is not perfect and oxidants are produced. We do have systems to cope with these oxidants, but these systems are not perfect.

What is oxidative stress?
ROS* are formed as a natural byproduct of respiration, and our body (including skin) has the means to deal with them. However, during times of environmental stress, like exposure to UV or heat, ROS* levels can increase dramatically, causing significant damage to cell structures. This syndrome is known as oxidative stress.

ROS* are also present in the atmosphere, especially in polluted environments and, incredibly, in some “skin care” products. Exogenous ROS* are formed from pollutants, tobacco, smoke, or ionizing radiation.

How bad is oxidative stress?
When ROS* production exceeds the cellular antioxidant capacity, there will be oxidative damage to cellular components such as proteins, lipids, and DNA. DNA damage includes single-strand lesions, deletions of bases, or “cross-links” between DNA and proteins. DNA damage is the basis of UV-induced skin carcinogenesis. Lipid peroxidation affects phospholipids both structurally and functionally and results in rigid cell membranes with altered permeability.

Protein alterations, whether direct or activated by proteases, are reflected in the skin by both reductions in total amount and alterations of collagen and elastin. Mitochondrial damage by ROS* leads to decreased ATP production and even cell death.

Should you worry about oxidative stress? The answer is “yes” if you live in a polluted city, or you smoke, or you spend a lot of time in traffic, or you blow dry your hair, or you go out in the sun without sunscreen.

Antioxidants: The scavengers of ROS*
The formation of ROS* is prevented by an antioxidant system that includes small antioxidant molecules (ascorbic acid, glutathione, and tocopherols) and enzymes that regenerate the reduced forms of antioxidants and disarm ROS* (SOD, peroxidases, and catalases). In plant tissues, many phenolic compounds (in addition to tocopherols) are potential antioxidants: flavonoids, tannins, and lignin precursors may work as ROS*‐scavenging compounds. Antioxidants act as a cooperative network, employing a series of redox reactions. For example, in plants, there are interactions between ascorbic acid and glutathione, and between ascorbic acid and phenolic compounds.

Non-enzymatic antioxidants
We, humans, depend a lot on plants for antioxidant power. Plants also need antioxidants (they have electron transport chain just like us) and some of these may have other functions in the plants that make them. You will find lots of plant-made antioxidant chemicals in the list of Skin Actives’ ingredients, including polyphenols and terpenes with subcategories including flavonoids (EGCG, apigenin, and quercetin), stilbens (resveratrol), carotenoids (astaxanthin, lycopene, and beta carotene), and more.

Skin issues related to ROS*
There are too many to enumerate, but they include wrinkles, sun (age) spots, vitiligo, gray hair, etc.

What is so special about Skin Actives? We have enzymatic scavengers of ROS*.
Most skin care products include antioxidants, usually vitamin E, ascorbic acid, or one of many botanical antioxidants, including plant extracts enriched with superoxide dismutase. Skin Actives offers purified, high specific activity superoxide dismutase, catalase, glutaredoxin, and methionine sulfoxide reductase.

Why enzymes? Enzymes are proteins that can accelerate the rate of specific chemical reactions that would otherwise go too slowly to be compatible with life. In the laboratory, reactions can be accelerated by changing temperature or acidity of the medium. Unfortunately, life has strict constraints, which in humans means about 98 degrees Farenheit and pH around 7, so to accelerate the rate of reactions we can use enzymes instead.

SAS offers a comprehensive list of protein/enzymatic antioxidants that complement our body’s own antioxidant system. 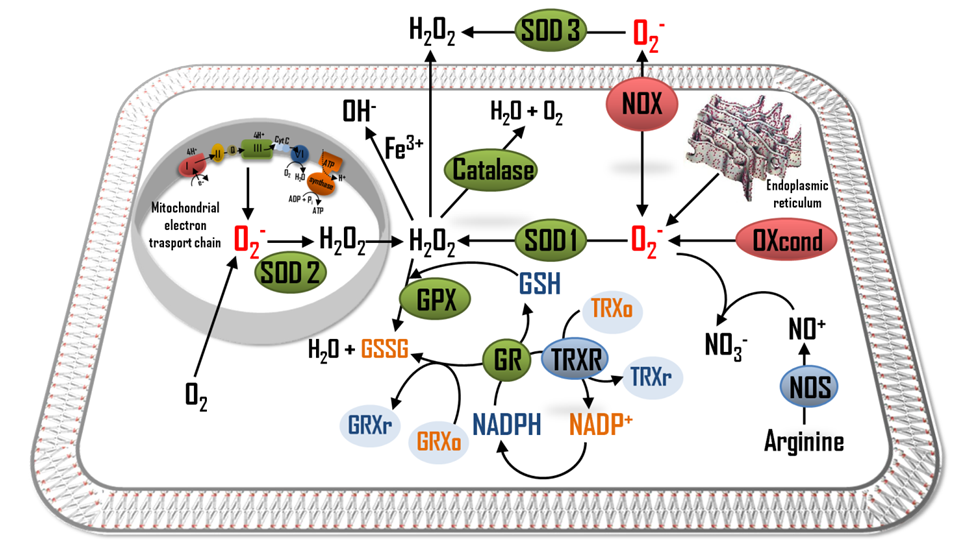 Figure: Enzymatic scavengers of reactive oxygen species (ROS*) with their cellular localization: cytosolic, mitochondrial, and extracellular. Nitric oxide (NO.) has functions that overlap with ROS*, synthesized from L-arginine and oxygen by enzymes called NO synthases and is one of the reactive nitrogen species (RNS*)

How much oxygen?
How much oxygen do we want? We want to preserve a status in which ROS* are “allowed” to fulfill their job as defenders against infection and as second messengers, without overwhelming the natural antioxidant systems and leading us into oxidative stress. The last thing we want is to overwhelm our antioxidant resources with “shots” of topical hydrogen peroxide or benzoyl peroxide.

Ready to use antioxidant products

Born as CHAS (complete hydrophylic antioxidant serum), we have now incorporated into this serum our ROS* terminator.

As a cream, we can add to this most complete antioxidant product both hydrophilic and lipophylic antioxidants, including our very best botanicals.

Individual antioxidants in SAS for your own formulation

Starting with the beginning of the alphabet, we have ascorbic acid and derivatives (our favorite, magnesium ascorbyl phosphate), açai extract, R-alpha lipoic acid, amla extract, apigenin, and so much more! Go through our list of actives and find antioxidants that will enrich your DIY product, making it better than anything you can find in a department store.

The most remarkable antioxidant ingredient, unique to SAS: our ROS* Terminator

The ROS* Terminator works to destroy ROS*, the oxygen ions that can harm our skin in many different ways.

What were they thinking?

In the old days, hydrogen peroxide was used to disinfect wounds, but then it was found that this procedure slows healing and leads to scarring because it damages cells. Nowadays we use hydrogen peroxide and other strong oxidants to remove spots from carpets and to bleach wood pulp, but not on wounds. We know that hydrogen peroxide is a reactive oxygen species (ROS*), and carries an oxidizing power that can be destructive.

Why pay $85 for Natura Bisse Oxygen Gel or $65 for Karen Herzog Oxygen Cream to “oxygenate” your skin?

In these two products, the source of oxygen is hydrogen peroxide, H2O2, a very strong oxidizer and highly reactive oxygen species. Because it is so reactive, most living organisms have enzymes, catalases and peroxidases, capable of destroying hydrogen peroxide as it appears. Apparently, the people at Natura Bisse don’t know about catalase, because they are trying to sell you a product containing hydrogen peroxide. They seem to think that your skin will benefit from the blockage of skin capillaries by oxygen bubbles. It will not.

So on the one hand we have Natura Bisse and Herzog trying to oxygenate your skin. And on the other, Skin Actives Scientific selling an antioxidant cream (and the individual components) whose function is to eliminate strong oxidants, like hydrogen peroxide. Science is on our side.