“Mother Nature is just chemistry, biology and physics. That’s all she is.”
Rob Watson

That’s “all” she is.  But looking at Mother Nature as an entity that we can study, research and understand, is by no means less beautiful that the images that humanity has drawn of an imaginary Gaia for millennia.  I prefer “my” Mother Nature, powerful but knowable.

Instead of being disappointed that Mother Nature (and all the other names people in all ages have given to Mother Earth, Gaia, Pachamama) is not a magic goddess we can please with crystals and candles, let’s recognize the beauty involved in understanding and learning about “Mother Nature”.  The crystal structure of a protein crucial for viral multiplication is not only beautiful, it can also save many millions of lives. And that’s science at its best. 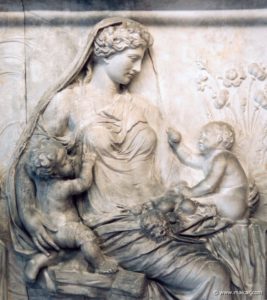 I will not repeat rumors here because that will make them stronger. The internet amplifies rumors like a virus, but don’t be fooled, the effects of rumors are not just “virtual”.  Claiming on TV and the internet and even from the pulpit that the virus was a hoax made silly teenagers go on Spring breaks to the beach and resulted in thousands of infections that could have been avoided.

The power of Science

What is so beautiful about a Gaia that we can study and understand?  Let me give you an example about not-science first. 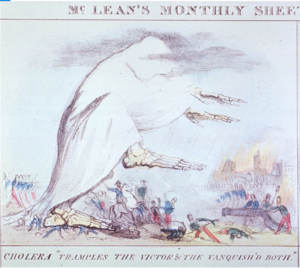 Figure. “Cholera tramples the victors & the vanquished both.” Seymour, Robert, 1798-1836, artist.  US National Library of Medicine.

What are the advantages of seeing Nature as an entity that can be researched, studied, understood? It puts humans in a position to mold their destiny rather than just been at the mercy of natural, unknown forces.

Instead of having groups of flagellants spreading the Black Death throughout Europe like in the Middle ages, we can study the protein structure of the virus, characterize enzymatic activities crucial to viral multiplication and design an inhibitor that, by inhibiting that enzymatic activity will work as an effective antiviral.

Other aspects of the pandemix that can be studied are the symptoms, infectivity (ability of the pathogen to establish an infection), incubation period, and more, allowing epidemiologists to predict the evolution of the pandemic depending on factors such as isolation of patients, quarantine, use of masks and other personal protection equipment, etc.  With this information, governments willing to listen to science can decrease enormously the magnitude of the pandemic, saving millions of lives and accelerating the return to normal life. Or not.

Because we are in 2020 and not in the Middle Ages, we don’t have to accept the word of evil people telling us that the pandemic is a punishment inflicted on us by G-D. My G-D and that of my ancestors does not do that. I hope yours doesn’t either.

I despise the idea of a god that punishes humanity for sins that they don’t even know have committed and I despise the people who spread those lies. That kind of false god is an invention of the fake prophets that have existed as long as humanity to take advantage of the ignorant who will pay for Forsythia.  The medicine of Hippocrates was all wrong, with “humors” that didn’t exist, but he was right that illness had natural causes and was not something sent by the gods to punish humans.

My “gut feelings” don’t tell me to go out and “If I get Corona, I get Corona”. It tells me to stay at home as much as I can, wash my hands after I open a package (which I disinfected first using some Clorox wipes), it tells me to talk to my grandchildren and tell them stories about magical bunnies.

The rest of the time, I bake and cook to fill the house with familiar smells, like the roasted chicken with garlic my mother used to cook, and the chocolate mousse cake (recipe available on request) that has been a staple of family birthdays for 45 years. I also learn as much as I can about the pandemic, how it is already slowing down in Northern Italy, and how scientists are working on vaccines and antivirals.

Have a look at the article I translated for my blog here, and see how scientists look at things.