What do mitochondria do?
Let me explain why mitochondria are so important and so worth the best possible care we can afford. Mitochondria provide energy as adenosine triphosphate (ATP), the form of energy our cells can use to do “housekeeping,” grow, and divide. This is true, not just for us humans, but for all eukaryotes (organisms with nuclei). Mitochondria use molecular oxygen to extract a lot of energy that would otherwise be lost, and foodstuff is eventually converted into two low energy molecules water and carbon dioxide. And I am not even going into why the reduction of NAD+ and FAD are crucial (will leave this for next post). 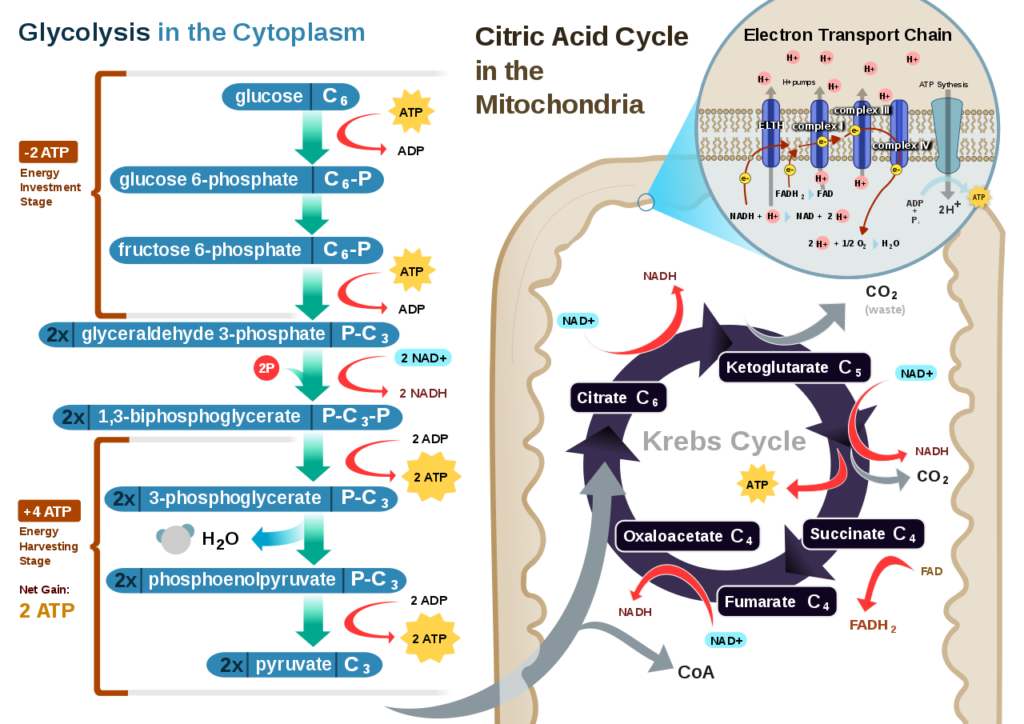 Figure. A diagram of cellular respiration including glycolysis, Krebs cycle (AKA citric acid cycle), and the electron transport chain. https://en.wikipedia.org/wiki/Cellular_respiration#/media/File:CellRespiration.svg

Mitochondria and aging
This great energy-converting efficiency displayed by mitochondria comes at a cost: the process itself produces strong oxidants like hydrogen peroxide, superoxide, and hydroxyl radicals as by-products. All of the cell’s sophisticated antioxidant mechanisms (including vitamin C, glutathione cycle, vitamin E, and various antioxidant enzymes) can’t completely protect mitochondria from slow but persistent damage. This oxidative stress makes mitochondria age at a faster pace than the rest of the cell, because oxidation of the organelle’s lipids, proteins, RNA, and DNA is accelerated. Indeed, oxidative damage to mitochondrial DNA (the only organelle with its own DNA outside the nucleus) is 8 to 10-fold higher than the damage found in nuclear DNA. Oxidative damage also adversely affects the inner mitochondrial membrane, where the crucial enzyme ATPase is located and where ATP is produced. The phospholipids of the inner mitochondrial membrane change and become even more sensitive to oxidative damage. These changes are bound to affect membrane fluidity and permeability, and will certainly impair the ability of mitochondria to meet cellular energy demands.

Oxidant-induced acceleration of senescence has major consequences for mitochondria. Aged mitochondria lose efficiency in their job of extracting energy from foodstuff, and enzyme activity and substrate binding affinity decrease. It has been found that this decay in function can be partially reversed in aged animals by feeding them the mitochondrial metabolites, acetyl carnitine and alpha lipoic acid. Information of this sort provides circumstantial evidence for the mitochondrial theory of aging (a.k.a. free radical theory of aging), which states that the slow accumulation of impaired mitochondria is the driving force of the aging process.

Even if we don’t accept the theory that mitochondrial aging is the cause of overall aging, there is no doubt that deterioration of mitochondria is at least partially responsible for the aging of the whole organism.

If mitochondria are so important for the skin, why are they ignored by the industry?
Actually, they are not ignored. There have been some attempts to approach the “energy problem”, some of these attempts have been misguided.
One of the first ingredients to be introduced in “cosmeceuticals”, i.e. skincare products that influence skin physiology but are “passed” as cosmetics, was alpha lipoic acid, an antioxidant crucial to energy use in the cell. R-alpha lipoic acid is a cofactor of the pyruvate dehydrogenase complex, crucial to respiration and energy production in the cell.

Coenzyme Q10, another favorite ingredient in skincare, is part of the electron transport chain in the mitochondria.

The introduction of these two valuable ingredients was followed by a big debacle. Idebenone, a synthetic chemical created to treat brain disease caused by defective mitochondria was designed to address the blood-brain barrier problem. The skin care industry appropriated this medicine without thinking of the immunological problems that would be created by introducing a chemical analog of Coenzyme Q10, a vital part of the mitochondrial machinery, into an organism capable of immune response.

Up to now, understanding of the effect of mirochondria aging on skin’s physiology has been translated into the topical application of alpha lipoic acid, acetyl carnitine, and various antioxidants in anti-age skin care products.

We at Skin Actives take the effect of oxidants on the cell very seriously, so we have been offering acetyl carnitine, CoQ10, alpha lipoic acid and other ingredients for a long time. We also broadened the spectrum of antioxidants and lipids for the prevention and reversal of skin damage. However, if you look at the complex process that is respiration, you will see that these ingredients are a very partial answer to mitochondria structure and function. This is why we offer mitochondria isolate for DIY and in a very special cream.

If mitochondria are so important, why were not used before Skin Actives?
Because they are not easy to obtain. But in one of my past lives, I was a plant organelle biochemist.

At Skin Actives we have taken mitochondrial rejuvenation a step further. Addition of mitochondrial concentrate to our actives and ready mixed products is a natural step in the efforts to bring the benefits of scientific knowledge and technology to skincare.

How do we prepare our mitochondrial isolate?

We follow a procedure initially developed by my colleague, Roland Douce, et al. (1987) in Grenoble, France, to isolate organelles from plant tissue.

Where will you find SAS mitochondrial isolate?

For the Do It Yourself fan, we offer mitochondria isolate as a suspension. Just add a few drops to your favorite concoction.

Claims on this page have not been evaluated by the FDA and are not intended to diagnose, cure, treat or prevent any disease.