I was recently made aware of yet another new “miracle” cure for hair loss. A molecule of unknown structure, with two trade names, unknown side effects and vague benefits, being used by L’Oreal to make money off of people desperate to stop hair loss that have never heard of our Hair Care Serum. It’s just one more example of the industry appropriating scientific sounding language to sell products of doubtful efficacy.

It is nice when science is done properly and results in the discovery of remedies that improve the lives of millions by ending nasty parasitic illnesses. It is even better when the scientists who do such good work get recognized with the Nobel Prize for Medicine in 2015.

Plants and microbes manufacture very complicated chemicals, designed to keep the enemies of the organism under control. Sometimes, one of the chemicals happens to keep a human enemy away too. You need the human persistence of scientists to find those special chemicals.

Avemectin is an earlier version of Ivemectin, a medicine that has practically eradicated river blindness and reduced the incidence of filariasis, parasitic infections caused by roundworm. Dr. Omura applied what the Nobel Committee said were “extraordinary skills in developing unique methods” for scientifically characterizing natural products in Streptomyces bacteria found in soil (related bacteria have yielded antibiotics like streptomycin). After obtaining cultures from Dr. Omura, Dr. Campbell documented one that yielded a substance effective against parasites in domestic and farm animals. He named the purified substance Avermectin. Further chemical tests produced Ivermectin that killed parasites in infected humans. The collective work of Drs Omura and Campbell produced a new class of powerful anti-parasitic drugs. 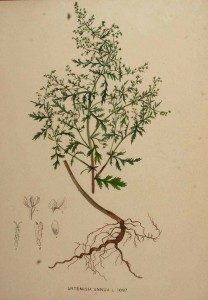 Dr. Tu was inspired by Chinese traditional medicine in discovering Artemisinin, a drug that is now part of standard anti-malarial regimens and that has reduced death rates from the disease. Dr. Tu screened many herbal remedies on malaria-infected animals and extracted a promising agent from Artemisia annua. Because of inconsistencies in test results, she turned to ancient texts and discovered clues to identify and extract the active component of the Artemisia herb. The proposed mechansim of action of artemisinin involves cleavage of endoperoxide bridges by iron, producing free radicals which damage biological macromolecules causing oxidative stress in the cells of the parasite, Plasmodium falciparum.

I find this year’s Nobel prizes for Medicine a reason to celebrate. Real, serious science done for the benefit of humanity.
We at Skin Actives love science… The real thing, like when using chemistry to look at plants used in old folk remedies in search of molecules that will improve life.