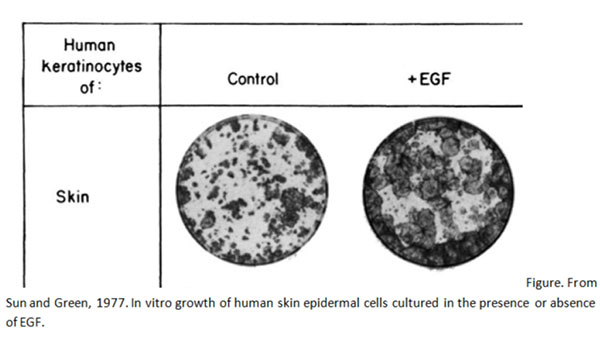 A good example of an active that has been discussed in articles published in peer-reviewed scientific journals is epidermal growth factor (EGF). There are more than 50,000 pieces of scientific literature document the activity of EGF. What is a growth factor? Growth factors are naturally occurring proteins capable of stimulating cellular proliferation and cellular differentiation. Growth factors bind to specific receptors on cell surfaces and are important for the regulation of a variety of cellular processes. Among the practical uses of EGF are its use in accelerating healing of the skin and cornea (the outside coating of the eyeball). EGF was the first growth factor to be discovered and studied, but many more factors have been found since then.

“In 1986, Stanley Cohen received the Nobel Prize for his work elucidating the role of EGF in the regulation of cell growth and development. This small protein (only 53 amino acids) was found to enhance epidermal growth and keratinization. Work by Cohen and his collaborators demonstrated that EGF directly stimulated the proliferation of epidermal cells, and this stimulatory action of EGF did not depend on other systemic or hormonal influences. Cells that respond to EGF do so because they have receptors on the cell membrane that recognize the factor which has been produced by cells that may be near or far from the target cell. The binding of the growth factor to the receptor initiates a cascade of molecular events that will eventually lead, among other effects, to cell division. Among the practical uses of EGF are its use in accelerating healing of skin and corneas. Although EGF was the first growth factor to be discovered and studied, many more factors have been found since then. These growth factors differ in size and structure, and as a consequence, in the receptors and types of cells that recognize them, and the effects they have on the target cell. Not all growth factors are suitable for skin care; some of them can have unwanted effects on normal skin.