But we need copper for good health. How much? We have very important enzymes that depend on copper for activity: cytochrome oxidase, copper/zinc superoxide dismutase, tyrosinase and more. Why is copper so important in these enzymes? Because of its capacity to take and donate electrons. Tyrosinase, for example, is an oxidase that we need to make melanin, the skin and hair pigment. For people who are trying to lighten their skin, or reduce melasma,  they will probably use products containing inhibitors of tyrosinase like some polyphenols,  substrate analogues, free radical scavengers, and copper chelators.  Were you aware of the role of copper in melanin synthesis?  Now you are.

More  numbers: toxicity will develop with more than 5.0 mg of copper per kg body weight.

You don’t need copper to be a toxic levels throughout your body to get problems in your skin. These days, many skin care products are including too much copper. The problem here is that excess copper in skin care products aggravates an existing problem: the presence of copper in polluted air and the presence of ROS* already cause skin aging (this is why you see so many antioxidants in Skin Actives antiaging products).  At high concentrations copper is known to produce oxidative damage to biological systems, including peroxidation of lipids and macromolecules that are vital to our skin health.

The same reason why some of our enzymes use copper is why this metal can cause damage: the oxidation potential of copper may be responsible for some of its toxicity. And yet, some “fashionable” skin care serums offer 1% copper peptides in them! That is 160 mg of copper per 100 grams of serum, added to the copper you are already ingest in water and food. Indeed, skin care companies seem to be competing to see which one offers the bluest of blue serums and creams!

Do these formulators know what a micronutrient is? I will tell them: it is a a chemical element required in trace amounts for the normal growth and development of living organisms. And 160mg of copper is NOT a trace amount.

If you wonder where this silly (and dangerous) tendency started, look for people who don’t know how to read a graph. As a trace element, copper is necessary for cells to grow and multiply at miniscule concentrations, because too much copper inhibits normal metabolism. As copper concentration increases, the organism increases its efforts to sequester the offending element. Keep going up and the cells will die.

What do I mean by reading a graph? Like many other factors, the synthesis, for example, of dermatan sulfate is limited at very very low concentrations of copper (present as copper peptide but more probably complexed to other, less advertised,  molecules). 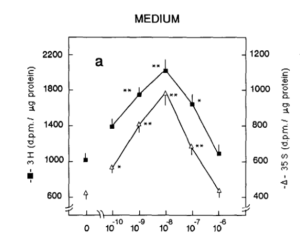 This curve (from Wegrowski et al., 1992) illustrates the stimulation of synthesis of glycosaminiglycans by copper peptide at low concentration, and inhibition of synthesis as it increases. The x axis shows molarity of copper and it is a logarithmic scale. This shape is only for the synthesis of one macromolecule but it is typical of what to expect for a trace element, one that you need at miniscule concentrations, like copper.

What do we see? As you start increasing copper concentration from 0, synthesis increases. At 10-8 M synthesis reaches a maximum.  and from there, synthesis goes down. The highest concentration used was 10-6M, and the authors did not go any higher.  To be able to tell what happens at a 1% concentration, you would have to first measure it, but nobody bothered! Still,  you don’t need much imagination to see that you would be damaging the cell by doing that.

Do you know how much that optimum, 10-8M is in %? 4 micrograms/L, or 0.4 micrograms per 100 mL. The 1% serum sold at present has enough copper in a jar for thousands upon thousands of jars.  And this is one of the best examples of something that is bad for you when you use too much. Expect more wrinkles, more hyperpigmentation, less collagen, less hyaluronic acid, less viable cells and slower healing.

Am I obsessed with copper use in skin care? Yes, because the misuse of scientific data offends me.  I see it as using scientific sounding jargon to manipulate consumers.  I may not believe in conspiracies, but I do believe that ignorance and incompetence are widespread.